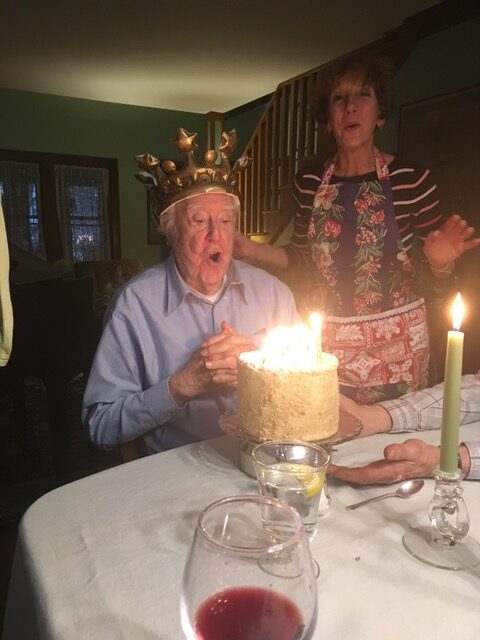 My father-in-law turned 99 last month. He marked the day with his first-ever video call, a Zoom celebration with 15 family members spread over three time zones. Within minutes, he’d adjusted to the unfamiliar technology and enthusiastically resumed his patriarch role, this time as the central image in our new Brady Bunch-style family motif.

It’s been seven weeks since my husband and I last raised a cocktail hour toast in his cozy apartment at a St. Paul senior living facility, a thrice-weekly practice we’ve observed since he relocated here in late 2017. Now, other than a daily trip to his mail slot, he’s locked down on the eighth floor. No more dinner conversations with other residents. No more monthly classical music enrichment classes or building-wide happy hours. No more Sunday dinners at our house or pizza nights with his son when I’m away. And, thankfully, no COVID-19 cases in his residence. Most days his in-person contact consists of the staff member who delivers a Styrofoam meal container three times a day.

It’s tough way for a “super senior” to start his centennial year. Yet in my own stay-at-home pandemic world, I draw inspiration and courage from his example.

His own life began as an act of pandemic resilience. The youngest of five children in the Baltic nation of Estonia, he once told me he was born to replace his next oldest sibling, a brother who died in a diphtheria epidemic at age three. His medical education at Estonia’s oldest university was cut short when that country found itself a ping pong ball in a World War II takeover contest between the Soviet Union and Germany. Reunited with his classmate fiancé after the war, the two married and spent nearly five years as displaced persons in Germany, and still managed to finish their respective medical and pharmacy degrees.

With a suitcase each, little money and their toddler son in tow, these refugees boarded a packed ship to New Orleans and then a train to Yuma, Arizona, where a local church sponsor awaited. It’s hard to envision a geography more different than Germany or Estonia. Within a couple years, he was drafted into the U.S. Army as a Korean War medical officer. His discharge was followed by a move to central Illinois where he built a successful small-town medical practice, educated three sons and at last created a stable life.

Three years ago, widowed after 67 years and alone in a sprawling house on seven acres, he announced, “it’s time for me to move to St. Paul.” We packed up the essentials and drove him north, then sold the house and contents. He looked back once as we rolled down the driveway, then turned ahead to set his sights on the future once more.

That’s what I’m trying to do these days, following his example that: